The rules for handling e-mail messages properly and considerately may be old hat to you, but it doesn't hurt to examine some of the newer and lesser-known tenets of polite e-mailing.

Mind the spam. Distribution lists are a godsend for getting the word out about something en masse, but take care not to spam your recipients. A problem may arise if you have multiple lists and send the same message to all of them: If an individual appears in each of your "San Francisco," "California," "America," and "Global" lists, and if you e-mail the same message to all four lists, that person will receive four copies. Pay attention to the memberships of your various lists, and carefully consider how you plan to use the lists.

Carefully consider who gets a reply. "Reply to all" is a powerful but widely abused e-mail feature. When more than four or five recipients are involved, you should use "reply to all" only if the message is of critical importance to the vast majority of those listed. Misuse of the "reply to all" feature is a primary culprit in environments where the flood of e-mail is out of control.

Out of office messages are more useful than you think. Arranging to send an automated "out of office" e-mail response to anyone who sends you a message can be a big time saver for people who are trying to get in touch with you. Make sure, however, that you know how the "out of office" system works so that the response goes out only once per sender and not as a "reply to all" (see above). 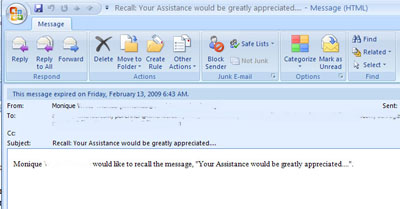 Message recall doesn't work. Except in a few corporate e-mail systems, once you press Send, your message is gone. By broadcasting a "Joe Smith would like to recall this message" notification, you are telling your recipients not only that you don't know how to compose an e-mail message properly, but that you don't understand how e-mail systems work.

Forget not the power of the pen. These days, whether you're sending a thank-you note or a simple greeting, a handwritten note will have much greater impact than a dashed-off e-mail message.