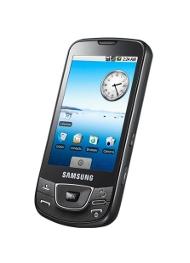 Samsung Electronics showed off its upcoming Galaxy smartphone, which runs Google's Android operating system, at the CommunicAsia exhibition in Singapore on Tuesday.

First announced in April as the i7500, the Galaxy has a 3.2-inch AMOLED (Active-Matrix Organic Light-Emitting Diode) screen, GPS, a 5-megapixel camera capable of recording video, and a scratch-resistant touchscreen that's made of tempered glass.

The Galaxy will go on sale in Germany and France by the end of this month, and Samsung plans to make it available in other markets around the world during the second half of this year.

A company spokeswoman said pricing of the handset has yet to be finalized.

The Galaxy doesn't have a physical keyboard, but the screen is equipped with haptic feedback that's activated when the virtual QWERTY keyboard is displayed, giving users a degree of physical feedback when they type.

Unlike HTC's Android handsets, the Galaxy doesn't have a trackball. Instead it has five physical buttons and a directional keypad.

The lack of a physical QWERTY keyboard and the use of an AMOLED display, which doesn't require a backlight, helps to make Samsung's Galaxy very slim.