Intel goes after Windows 7 on netbooks with Linux 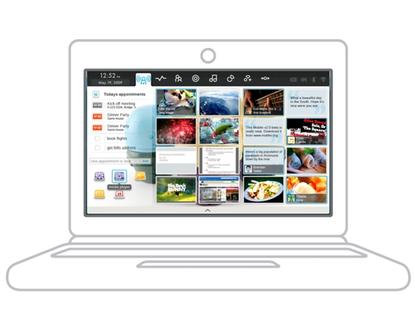 In an effort to counter the growing dominance of Microsoft's Windows OS in netbooks, Intel on Tuesday announced a beta version of a Linux OS it has developed for low-cost laptops and mobile devices.

The chip company on Tuesday announced a beta of Moblin 2.0, a stripped-down distribution of Linux optimized for smaller screens on netbooks and mobile Internet devices (MIDs).

Intel has fine-tuned Moblin for netbooks based on Atom chips with a simple user interface and improved power-saving features.

Most netbooks today ship with Intel's Atom chip but run the Windows XP operating system, which Microsoft ships for low-cost laptops. But Intel wants to ensure that every "ounce" of technology - including Moblin - put into Atom is optimized for size and power consumption, said Doug Fisher, vice president and general manager of the software and services group at Intel, during a conference call on Tuesday.

Netbooks are low-cost laptops characterized by small screens and limited graphics capabilities. The laptops are designed for basic purposes such as Web surfing, e-mail and word processing.

Shipments of netbooks grew sevenfold in the first quarter of 2009 to reach around 4.5 million, with the number expected to reach 22 million by the end of the year, according to IDC.

Intel has contributed a new user interface to the beta, which is optimized for the smaller screens of Atom-based netbooks and MIDs. The new UI aggregates social networks under a single interface, which should make interacting with friends easier, Fisher said.

The beta release comes ahead of Microsoft's planned release of its next-generation Windows 7 operating system, which will include a version optimized for netbooks.

However, Fisher said that Moblin was not designed to compete with Windows. Both offer unique user experiences, and there are no points of comparison, he said.

"It depends on the user experience the [PC maker] tries to put in the [netbook]," Fisher said. Moblin is being designed as a slim version of Linux optimized for size and power that can boot up within five seconds, he said.

That is much quicker than Windows XP, which is a full-featured operating system that in some cases could take up to one minute to load.

However, the Intel officials seemed to recognize Windows as the dominant OS and were willing to concede that the popularity of Windows XP might carry over with Windows 7.

"Windows 7 is a good choice and our customers will use that too," said Noury Al-Khaledy, general manager for netbooks and nettops at Intel, during the conference call.

Netbook users are familiar with Windows environments and may feel uncomfortable moving to a Linux distribution, said Jay Chou, research analyst at IDC.

Netbooks started off as devices to run basic applications, but consumers today want to do more, like run more powerful applications or play games, Chou said.

"Client-side Linux is a tough nut to crack," Chou said. Limiting features in the Linux OS or giving users the inability to install more applications may limit capabilities of devices, Chou said.

Development of the Moblin OS was initiated by Intel in 2007 and was last month handed over to the nonprofit Linux Foundation, though Intel continues to contribute to the efforts.

The beta version of the Moblin OS is available on Moblin's Web site.

A number of operating systems designed for netbooks are available, including GoodOS's gOS3 Gadgets and Canonical's Ubuntu Netbook Remix, which was launched late last month.

Built on the Ubuntu 9.04 Linux core and mostly known by its Jaunty Jackalope moniker, Netbook Remix builds applications into a one-touch interface and uses fewer software resources to save battery life.

The OS has received positive reviews from Linux enthusiasts.