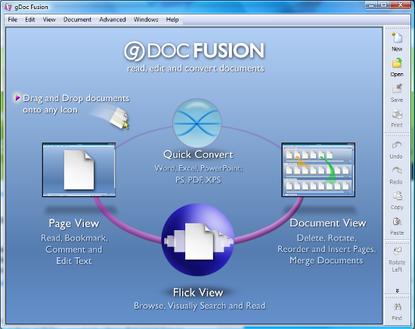 If you had asked me a month ago, I would have said that the PDF software category was completely bracketed and saturated, between Adobe Acrobat 9 Pro Extended at the high end, Adobe Reader for free, and numerous cheap third-party Acrobat clones in between.

I would have been wrong.

gDoc Fusion, from Global Graphics, offers a new take on PDF and XPS creation. It doesn't do everything that Acrobat does, but it covers most of the primary use cases and has an innovative user interface. As shown in the screen shot below, Fusion allows the user to drag and drop a file on icons for Page View, Quick Convert, Document View, and Flick View.

Flick view, offers an iPhone-like interface to a document, allowing the user to smoothly flip through the pages to find a given visual pattern and zoom any given page.

In my two weeks of testing an early version of the product that released today, I did find several bugs and reported them, but they only appear on my Vista for x64 machine: the product is completely solid on my 32-bit Windows XP machine. Fusion does not do "paper capture," but that's now a standard feature of scanner software. In fact, there are many Acrobat functions that have been omitted from Fusion, but perhaps their omission helped to make Fusion more usable than Acrobat.

At US$99, gDoc Fusion is affordable enough for everyone in the office who needs it to have a copy and easy enough so that they all can use it. In addition to the overall improved interface, Fusion does a better job than Acrobat at redacting sensitive text from PDF documents and editing PDF text in place. It also fills a major void in Acrobat's functionality and converts PDF documents back to Word format.