The Replica runs in the background, allowing you to do other work while it does the backup 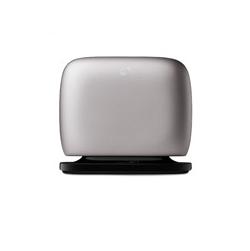 What it is: Imagine a really small toaster that was flattened, and you get the idea of the size of the Seagate Replica, a 250GB or 500GB hard drive that connects quickly and easily to your PC or notebook to provide instant backup of everything that you've got stored on the computer.

Unlike regular external USB hard drives, users can just plug in the Replica and leave it alone -- the software takes care of the rest, backing up all the files on the hard drive without needing any additional user support. The 500GB version is aimed at backing up two computers -- it also comes with a handy USB docking station that lets you place the Replica on a vertical stand.

Why it's cool: If you (or your users, or family members) hate the idea of data backup, you really can't get any easier than the Seagate Replica.

The "set it and forget it" concept really does apply here. After connecting the USB cable to my notebook, I got the pop-up window asking me whether I wanted to start the backup, and after choosing "yes", the Replica was off and running. The cool part is that the Replica runs in the background, allowing you to do other work while it does the backup.

The software is also smart enough to track changes to your files while it's working, so you can be assured that the Word document you created while Replica was running will still be backed up.

Another cool feature: Replica will remember where it was in the backup process if you shut down the system, and will start back up when you plug it in later. I started a backup at home one night and was able to finish it at work the next day, for example.

The Replica software runs in the Windows system tray (at least in Windows XP), and lets you get a glimpse as to its status (how many files it has left to copy, for example), as well as other options for backup and security (you can set a password for access to the backup copy).

Some caveats: The only recommendation I would have before using this is to make sure that you've cleaned up the hard drive you want to back up. In my test, it took several hours for the Replica to copy every single file (I had at least 30,000 files it needed to go through), and this likely includes files that I really don't need copied.

If you are relatively organized in your file storage, it might be easier and quicker to just copy needed files (photos, music and videos, for example) via a regular USB external hard drive.