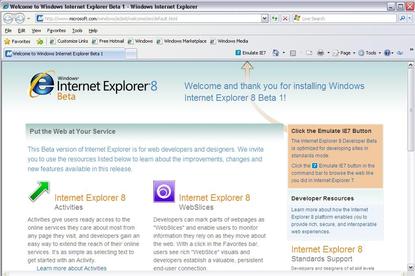 As the browser wars have heated up again, so have complaints that Microsoft is once again unfairly leveraging its Windows OS - this time Windows 7 - to promote its Internet Explorer browser.

Browser competitors Mozilla, Opera and others are bristling about a setting in the Windows 7 Release Candidate pushed out via Microsoft's Windows Update service last week that makes IE8 the default browser upon installation, even when someone was previously using other browser software.

Competitors complain this gives IE8 an unfair advantage over their software.

"We're concerned, of course, and continue to investigate," Mitchell Baker, chairman of Mozilla, which releases the Firefox open-source browser, said via e-mail Friday.

"Using the Windows Update channel to update Internet Explorer in any way that undermines user choices is a clear example of how Microsoft uses its monopoly position to damage competition in related products."

However, analysts point out the Windows 7 RC1 is not the final version of the OS, and consider it highly unlikely - given Microsoft's antitrust past and even present trouble with the European Union over IE's inclusion in Windows - that the final version will do such a thing.

"It's not in Microsoft's interest to stir up that kind of controversy so close to the actual release of the product, so I doubt it was deliberate," said Laurent Lachal, a senior analyst with Ovum.

"They have more to lose through that kind of controversy in terms of bad publicity than they have to gain."

Microsoft did not reply immediately to a request for comment Friday.

Even if Microsoft changes the setting with the final release of Windows 7, which some expect as early as October, "the damage is already done," said Opera CTO Hakon Wium Lie.

"They have pushed IE8 onto Windows XP and Windows Vista users," he said. "When they run IE8, Opera users will find that their browser preferences are reset. Likewise with Firefox."

Lie said that although his company would prefer to "compete on merit," he believes Microsoft's behavior, which is not likely to change, may have to be controlled by government regulation for it to stop.

Still, another analyst said that even if Windows 7 makes IE8 the default, there is nothing stopping a user from making a browser of their choice - be it Firefox, Opera, Google's Chrome or Apple's Safari - the default once the OS is installed.

"They're well versed in the situation and they're pushing the envelope as far as they can to put their browser in front of people. It's a business strategy."