Gmail down; outage could last 36 hours for some people

A Google spokesman has characterized the problem as "a minor issue". But a pain nevertheless for some users. 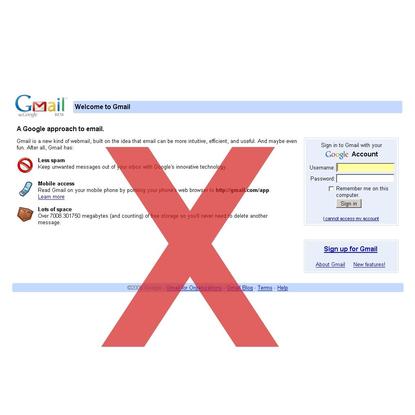 Gmail down again: will users vote with their feet?

Google's Gmail e-mail service is down for an undetermined number of users, and while the outage has been partially fixed, some people could be locked out of their accounts for many more hours.

In its latest update about the problem, posted at around 9:30 a.m. U.S. Eastern Time on Tuesday, Google said that it could take between 24 hours to 36 hours from that moment to restore all affected accounts.

A Google spokesman characterized the problem as "a minor issue" that struck at 5 a.m. Within 30 minutes, the service had been restored for "nearly all affected users," he said via e-mail at 4:30 p.m. on Tuesday.

"We are working to fix the issue for the few users still affected. We know how important e-mail is to our users, so we take issues like this very seriously and apologize for the inconvenience," he said.

The issue, which at its peak affected "a small subset of users," prevents people from accessing their accounts. About two weeks ago, Gmail suffered a major outage that affected many of its users worldwide and lasted for two-and-a-half hours. Gmail also ran into problems several times in August and October of last year.

The outages affect all types of people, from casual users who use Gmail for personal communications to those who rely on it for their work e-mail as part of the Google Apps hosted collaboration and communication suite. This is because Google serves all of its Gmail users from the same data-center infrastructure, including Apps Premier users, who pay for their service and are covered by a 99.9 percent uptime commitment.

One outage, on Aug. 11, lasted about two hours, but affected almost all Apps Premier users. Others on Aug. 6 and Aug. 15 hit a small number of Apps Premier users, but both outages were lengthy, affecting some users for more than 24 hours. In all of the incidents, users were unable to access their Gmail accounts. In mid-October, an outage locked some affected users out of their Gmail accounts for about 30 hours. Later that same month, a glitch delayed by days the activation of the Gmail service for new Apps subscribers, leaving them without e-mail access during that time.

Shortly after the Gmail outage in February, Google delivered a previously promised dashboard with the performance status of Apps services.

Performance and availability problems continue to be among the main objections and concerns about Web-hosted applications, which reside on the Internet "cloud" and are gaining popularity among IT managers and CIOs. There are also concerns about security and privacy. This weekend, a Google glitch made some Apps files accessible to unauthorized users in a small number of accounts.

All Gmail users have their data served from two separate locations, as a failover provision, but in the infrequent cases where the backup option doesn't kick in, then a lengthier restoration process has to take place, he said at the time.

"Any time there's an outage, the vast majority -- 99-plus percent of people -- don't experience any issue because we automatically fail them over to the other location," he said.

"Where there are problems is in the cases where we can't fail that user over [to the backup] for whatever reason -- there's an error with the account, or the master and the slave [copies] are out of sync. So in a few circumstances, we have been unable to fail a user over and we can't restore that user's access to the service until we restore that physical location. This is an area where we're constantly getting better and some of the things we've done as a result of our learnings over the last few months address that," he added.