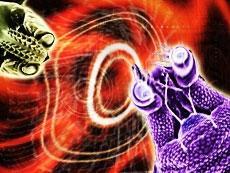 Botnets will employ more obfuscated control techniques including the use of peer-to-peer networks during 2009, according to security researchers, following the McColo datacentre take-down last year.

Hackers have a larger hunting ground, experts say, thanks to an explosion of free Web hosting and blog services such as Microsoft’s Windows Live Spaces and Google's Notebook and Blogspot, together with the decreasing effectiveness of image verification systems like CAPTCHA.

“2008 marked a turning point in the war against spam,” Anstis said in a written statement.

“Internet security and law enforcement professionals in different countries proved that when you go after the sources of the global spam scourge, it can be beaten.

“The key to winning the battle for your inbox is clear - we need to stop the guns, not just the bullets.”

The Marshal8e6 TRACE January report claimed the Srizbi botnet, which was responsible for 50 percent of spam distributed last year, is still operating at less than half capacity following the closure of the McColo datacentre. Reports suggest the botnet pumped out between 60 to 80 billion spam e-mails a day at its peak early last year.

“[Botnets] may adopt a more resilient peer-to-peer or layered model where control servers are harder to access and spread among many hosts,” the report states.

“The negative side of this is that the increased pressure on the botnet operators will force them further underground and we may see them develop ever more complex command and control networks.”

The reports follow one of the deadliest attacks targeting a Microsoft Windows exploit to date, which infected some 9 million PCs over two weeks this month.

The Downadup or Conficker worm exploits a bug in the Windows Server service used by Windows 2000, XP, Vista, Server 2003 and Server 2008.

Spam containing fake URLs fell from a third of total spam distribution to less than 1 percent this month. Viagra and drug-related e-mails constitutes 70 percent of all spam, according to the report.

Researchers claim spam from the Srizbi, Rustock and Mega-D botnets, responsible for about 75 percent of global spam, is still decreasing since a record 85 percent increase from January to June last year.