Nokia has announced the E63, a smartphone that will cost just US$250 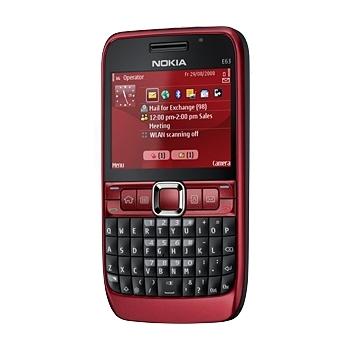 Nokia's E63 smartphone, announced Wednesday, will cost €199 (US$250) before any subsidies -- a price that puts the phone maker ahead in a burgeoning price war and which one analyst described as "eye-popping."

The E63 is a qwerty messaging device, with a 2.36-inch display, a 2-megapixel camera and two customizable home screen views for both business and personal use. Nokia promises easy e-mail setup and users can surf the Internet using a WLAN.

The phone also comes with support for Files on Ovi, so anyone buying the handset will have access to 1G byte of free online file storage, according to Nokia.

"Nokia has never made any secret of the fact that it wanted to take S60 to aggressive price points and with a retail price of 199 it is certainly showing Nokia can do that," said Ben Wood, director of research at CCS Insight.

Other phone vendors will have no choice but to follow Nokia's lead. Companies that want to be competitive have to match the best prices in the market and with the economy being what it is pricing will become increasingly important, according to Wood.

"Given the current economic climate, price is becoming more important than ever before, because what we are seeing is that the major network operators are starting to take subsidies out of phones, so if you want well-featured phones bought by consumers you have to supply them at an aggressive price," Wood said.

Malik Saadi, principal analyst at Informa Telecoms & Media, has identified the same trend -- the price war will only intensify at a time when new entrants into the market are increasing their pressure on competitors to reduce prices, mainly for feature phones and smartphones, he wrote in a recent research note.

With Chips becoming a commodity, the use of off-the-shelf solutions and the move to open source will help vendors who want to develop cheaper phones, but also accelerate price competition, according to Saadi.

Nokia isn't the only company that plans to put smartphone pricing under pressure. Huawei and newcomer INQ are also getting into the game.

Huawei -- a company that has already turned mobile infrastructure pricing on its head -- said last week that it plans to launch both Android and Symbian phones during the first half of next year. And INQ is launching Thursday, with its devices designed to stimulate mass-market mobile data use, featuring a select set of geographically relevant social networking, e-mail and instant messaging applications, according to a company presentation.

But as the phone market continues to evolve the smartphone moniker is losing in importance, according to Wood.

"The smartphone as we know it today, and as it has been defined historically, is probably an irrelevant definition. Consumers buy a phone, and they want it do things they want to do. There will be a real blurring between the kind of higher end midtier devices and the lower end smartphone devices, and consumers don't know the difference between the two," he said.

The fact that applications beyond talk and text are starting to get some momentum is also an interesting development, according to Wood.

"Social networking for the younger demographic seems to be a very powerful hook; Facebook now has 15 million active mobile users and in the context of where we've been with mobile data in the past it's pretty incredible," Wood said.