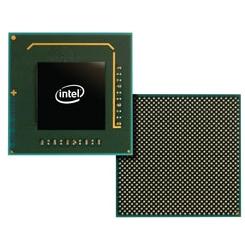 Demand for Intel's Atom processor is strong, with computer makers clamoring for more chips to plug into the small, portable laptops called netbooks, but the chips remain in short supply. The problem isn't that Intel can't make enough of the silicon chips -- the company can, and it is -- but availability remains stymied by a testing bottleneck that prevents the chip maker from meeting demand.

This bottleneck, first highlighted in a July conference call by Intel CFO Stacy Smith, exists because Intel underestimated the level of end-user demand for the chips found in netbooks. The shortage of Atom chips is so severe that Asustek Computer decided to use a much older Intel chip, the 900Mhz Celeron M 353, in two models of its popular Eee PC.

There's no quick fix. Intel can't easily take away capacity from other processors to handle the higher Atom demand. Atom processors are cheaper than other Intel chips and priority in the testing process goes to more expensive models that command higher average selling prices (ASPs).

"It would not be fiscally prudent to take capacity away from Core processors, with a US$100-ish ASP, to service Atom, which have a $25-ish ASP," wrote Dean McCarron, president of Mercury Research, in an e-mail.

Underscoring the fast-rising pace of demand for Atom, McCarron repeatedly revised his own shipment forecasts for the chip upwards, doubling them every six weeks since January.

One of Atom's advantages is its small size. Intel can cram 2,500 of them on the 300-millimeter silicon wafers it uses to make chips, helping to keep unit production costs low. But testing and assembling raw silicon into finished chips is a labor-intensive process. That's one reason Intel can't easily increase testing capacity.

"Capacity needed to be added, and that can only be done so fast as one has to buy equipment, install it and set up the appropriate factory lines, etc.," McCarron wrote.

Responding to a request for comment about the testing bottleneck, an Intel spokesman confirmed the testing constraint that has limited Atom availability remains, but did not say when the bottleneck would be eased.

Depending on end-user demand for various Intel chips, it's possible the bottleneck may not completely disappear until next year, when Intel completes construction on a US$1 billion test and assembly facility in Vietnam. That plant, which will be Intel's largest testing facility when completed, is expected to begin production next year.