Menu ARN
Apple’s next Mac chip is on the way; here’s how much better it could be

Apple is in the midst of a two-year transition away from Intel and AMD chips to its own Apple Silicon. The low-end products are already covered by the first-generation M1 chip that's in the MacBook Air, 13-inch MacBook Pro, Mac mini, and now the 24-inch iMac. These are all well-served by the M1 chip, which is basically an A14 on steroids. Just as the A12X was the A12 with double the high-performance CPU cores, GPU cores, and memory bus width, so too, is the M1 as compared to the A14. That's why Apple put it in the new iPad Pro.

That's plenty of power for the lower-end Macs, but the bigger MacBook Pros and iMacs will really need something a little faster if they're going to replace the powerful Intel CPUs and AMD GPUs in current products. And the Mac Pro, well, that's a whole other set of requirements, and will probably be the last product to make the Apple Silicon transition. So, with rumours swirling that the M2 (or maybe it's called the M1X?) entering production, it's worth setting our expectations. What's the next Apple Silicon chip going to be?

Over at CPU-Monkey we've seen leaked specs and benchmarks for something called the M1X. It's worth taking these with a grain of salt, as unreleased product details on that site often turn out to be wrong. Still, they represent a very reasonable set of specs for the next step up in Apple Silicon.

Whether Apple calls the chip an M1X or an M2 is almost academic. M2 would make more sense if the chip were to be based on the architectural improvements of the A15 processor coming to iPhones and iPads this fall, while M1X makes more sense if it's a souped-up M1. Frankly, it seems hard to believe that an M-series chip based on the A15 architecture would be ready to enter production already, so my guess is that any new Apple silicon chip shipping in 2021 will be based on the A14 and M1. 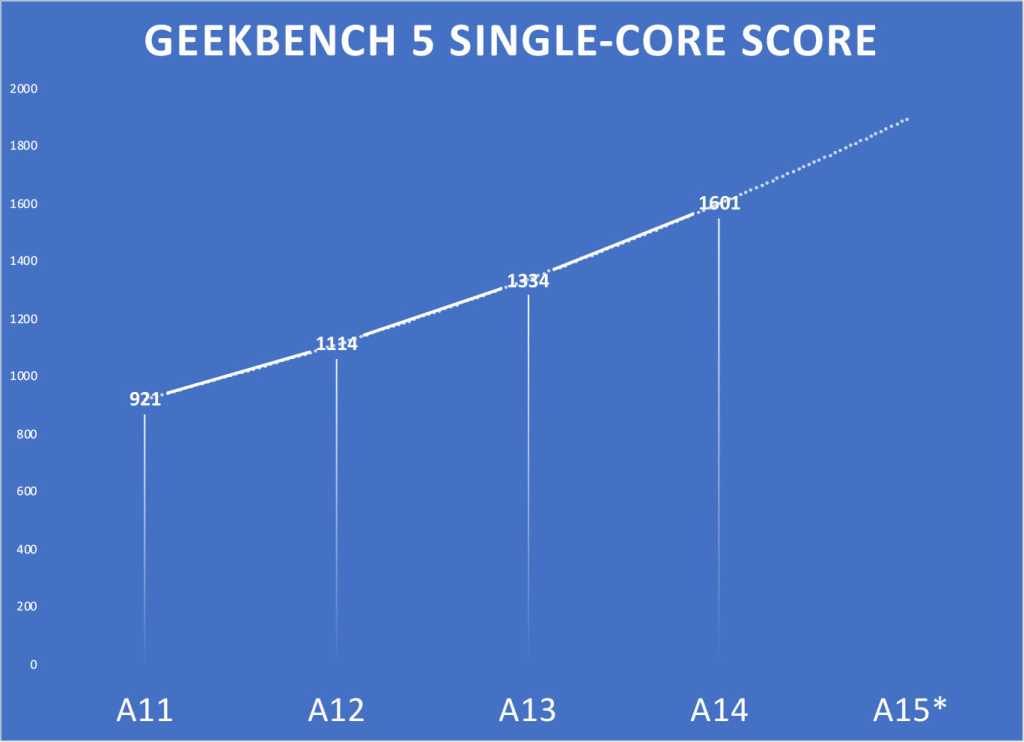 The A15 will likely boost single-core performance over the A14 and M1, but we expect Apple to aim for more cores over faster cores in its next Apple Silicon chip.

The A15 is expected to be made on a somewhat enhanced 5-nanometre process and offer a bit more CPU and GPU performance, along with the expected yearly updates to image/ video processing and the Neural Engine. I think Apple will finally step up to LPDDR5 memory this year too, giving it a lot more memory bandwidth. Those improvements would be foregone in an M1X, but we'd expect them in an M2.

In fact, Apple may call the next chip the M2 even if it's still based on the A14 and M1. What's in a name, right? But the chip I expect in higher-end Macs this year, whatever it is officially named, will likely be an extension of the A14 and M1 line. 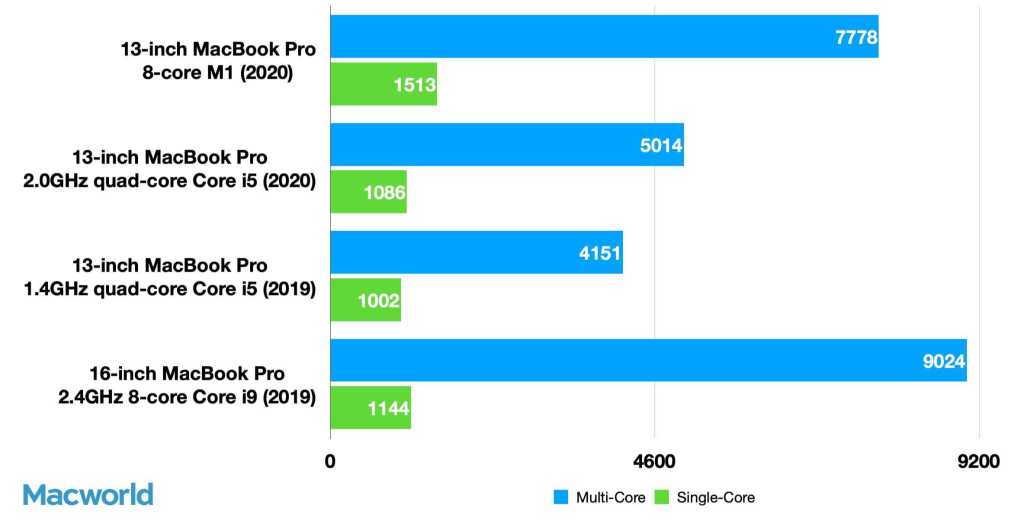 When it comes to high-end performance and benchmarks, those high-performance cores are certainly doing most of the work. The bigger 27-inch iMacs and 16-inch MacBook Pros have Intel processors with six or eight cores (even 10 as an option in the 27-inch iMac). Matched core-to-core, Apple's chips are much faster than Intel's, so the boost to eighthigh performance cores would guarantee Apple some huge performance wins.

The M1 doubled the number of GPU cores in the A14 from four to eight, and we think the next step up in Apple Silicon will double it again. A 16-core GPU (giving Apple 256 execution units) will certainly explode the size of an already huge system-on-chip. But of all the upgrades, this is the most necessary to replace what Apple already has on the market. The larger MacBook Pros and iMacs have discrete AMD Radeon graphics processors, each with its own pool of high-speed memory.

The 16-inch MacBook Pro offers a Radeon Pro 5500M or 5600M with 4GB or 8GB of dedicated graphics memory, so we're looking at about around five teraflops of graphics processing power. The 27-inch iMac can feature anything from a Radeon Pro 5300 with 4GB of RAM to a 5700XT with 16GB. We're looking at a range of around eight teraflops to 12 teraflops of processing power, and perhaps more importantly, lots of dedicated high-speed GDDR6 memory. 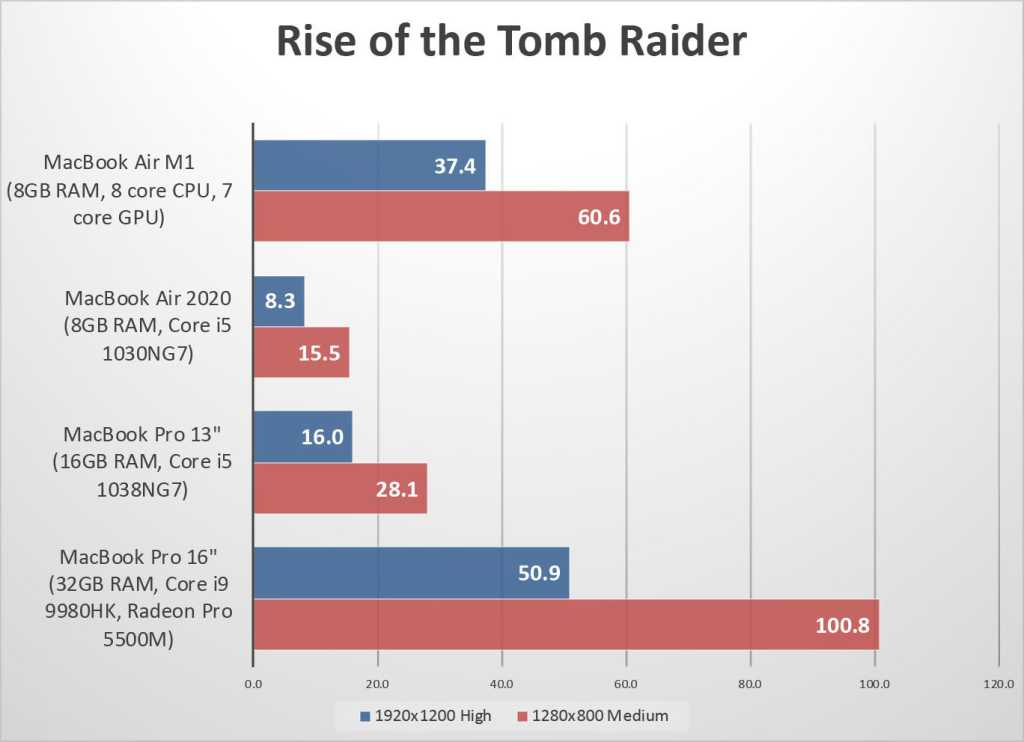 The M1 already stomps all over Intel's integrated graphics, but has a long way to go to match the Radeon Pro 5500M (let alone the iMac's faster GPUs).

While we've been very impressed with the relative performance of the GPU in the M1—we find it punches way above its 2.6-teraflop weight class—but it's still going to need a big boost if it wants to speed past the Radeon chips Apple ships in its products today. Doubling the GPU cores ought to do it.

The M1 can be configured with either 8GB or 16GB of memory. We find that the 8GB version performs much better than a comparable Intel-based Mac, but nonetheless, higher-end Macs are going to be expected to perform demanding jobs that use lots of memory.

The 16-inch MacBook Pro today starts at 16GB of RAM and is configurable up to 64GB. The 27-inch iMac starts at 8GB but can go all the way up to 128GB. I doubt Apple will try to match the top RAM specs of these machines, but both 16GB and 32GB versions of the next Apple Silicon chip are basically a shoo-in.

What's more intriguing to me is how Apple might also increase memory bandwidth. The M1 doubled the 64-bit memory bus of the A14 to 128-bit. That means it's able to deliver about 68GB/sec using LPDDR4X. That's fantastic for a super thin-and-light laptop, and even outclasses the 27-inch iMac, but those Radeon graphics chips have dedicated graphics memory with bandwidth well over 100GB/sec.

Apple's graphics processors are very bandwidth efficient, but I would think a 16-core GPU would quickly find itself bottlenecked by memory bandwidth, especially if it had to share memory with all those CPU cores. Increasing to a 256-bit memory interface is certainly possible and would really let the chip fly.

What about the other stuff?

If the next Mac processor is indeed based on the A14 and M1, we expect all the other stuff in the chip—the audio and video processing, encoders and decoders, and Neural Engine—to remain unchanged from the A14 and M1. If by some feat of engineering, the next Apple silicon chip actually takes its heritage from the design of the upcoming A15, we expect all of those features to improve. The Neural Engine, in particular, would likely get a substantial upgrade as Apple is all-in on AI and Machine Learning.

Even without any improvement to all of this un-core stuff, the increase in CPU and GPU core count would make the next Apple silicon chip an absolute screamer, especially if Apple doubles memory bandwidth as well. It would also make the chip absolutely huge: the M1 is already a whopping 16 billion transistors, and you can expect a version with double the CPU and GPU cores to be at least 24 billion or so. That's not unheard of (AMD and Nvidia's biggest desktop GPUs are that large), but it would make the chip far and away the biggest complete system-on-chip on the market, even bigger than the chips in the Xbox Series X or PlayStation 5.

More from APC by Schneider Electric