Samsung officially announced the Galaxy S III in London earlier this month, but today was the first time we've been able to get our hands on it. Much has been said about the Galaxy S III's design, but we can assure you that in no way, shape or form does this feel like a cheap device. Despite its plastic construction, the Galaxy S III doesn't creak or rattle when pressed and the fit and finish is as good as most flagship smartphones on the market. 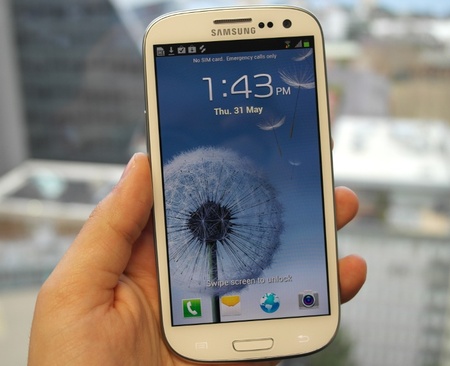 The Galaxy S III's rounded shape is in stark contrast to its predecessor, the Galaxy S II, which uses a much squarer design. Critics have said this makes the Galaxy S III look like a toy and harks back to the design of older phones. We disagree with both of these statements.

Firstly, the Galaxy S III feels very comfortable to hold in your hand and is much easier to use single-handedly than its major competitors, the HTC One X and the One XL. The slightly concave design and light weight only further add a comfortable feel. In our experience, the Galaxy S III's design makes it easy to reach most of the screen, though its long length means its still a slight stretch to tap near the top of the display. This will obviously depend on the size of your hands and fingers.

Speaking of the display, the Galaxy S III's Super AMOLED HD screen is one of the best on the market. It has a slightly less pixels per inch rating (ppi) compared to the HTC One X/XL, but it doesn't look inferior. We haven't had a chance to do any extensive testing, but text on Web pages is crisp and clear with no visible aberrations and images are bright and vivid with excellent colour reproduction.

One thing that hasn't changed in Samsung devices is the company's insistence on a flexible battery cover. As you can see in our image below, the Galaxy S III uses a similar manufactured cover as its predecessor did. Despite looking like a piece of flimsy plastic in photos, the flexible cover isn't a negative and clips on securely. 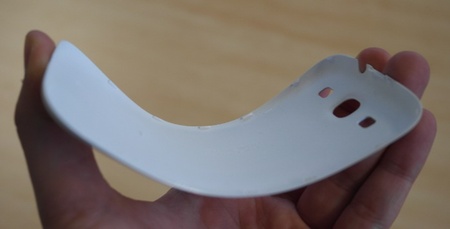 From the moment you pick up the Galaxy S III one thing is very clear — this is a super fast phone. There is no evident lag in basic user operations, like swiping through home screens, scrolling through lists, opening Web pages in the browser and closing apps.

Samsung's latest version of TouchWIZ, the user interface layer that sits over the top of the Android UI, is impressive on first glance. We particularly noted that it scrolls through home screens with impressive speed, even if we filled the screens with as many widgets as possible.

One disappointment is Samsung's lock screen, which still lags on occasion. There's often a clear 1-2 second delay when pressing the power or home button to wake the screen from sleep, especially if you haven't unlocked the screen for a while. We've seen the same issue on both the Galaxy S II and the Galaxy Note, so it appears Samsung still hasn't resolved this issue, even if it is a minor one.

We'll have a full review of the Galaxy S III in the coming days, along with a closer look at other issues, like battery life, Samsung's S-Voice software and a number of other exclusive Galaxy S III features. In the meantime, if there's anything you'd like to ask us about the Galaxy S III, let us know in the comments below.