Optus has finally revealed its pricelist for National Broadband Network (NBN) services and has become an NBN wholesale aggregator on a trial basis.

So far several ISPs have already announced their pricing for the NBN. Internode released its NBN pricelist in July, which has since been revised. Exetel and iiNet have released its pricing.

Optus' monthly NBN plans start from $39.99 for 40GB worth of data when bundled with another service. Download speeds can be boosted by purchasing 'speed packs' with the highest speed add-on costing $20 extra per month.

Please refer to pricelist below

The telco is offering plans in bundles and standalone packages. Customers will initially be on month-to-month contracts since Optus will only offer long-term plans after it finalises a wholesale broadband agreement with NBN Co.

All plans come with a free NBN-compatible WiFi hardware with no installation costs. Specialist installation teams will be available to set up services for customers.

Business plans for SMBs will be released early next year.

Optus is also trying its had at being an NBN wholesale aggregator with iseek Communications as its first customer. The telco's aggregation service is being offered on a trial basis for now.

It will start offering value-added services on top of its NBN wholesale products next year.

“Optus Wholesale's NBN aggregation service allows a service provider to reduce the number of points-of-interconnect [PoIs] to the NBN,” Optus said in a statement.

“This improves the economics of connecting users to the NBN and enables partners using the service to stay competitive with larger service providers.” 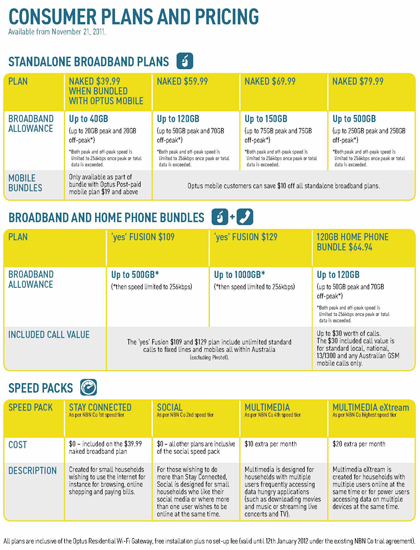 How to successfully leverage working from home post coronavirus

Driving Sales and Cash Flow for the IT Supply Chain