The iPad 2 runs Apple's iOS 4 operating system, though it will soon be upgradeable to the latest iOS 5 version. It offers a familiar swipeable home screen enhanced by folders, and the consistent Apple UI look and feel extending across all of the standard applications. If you have never used an iPad before, you can expect a device that is easy to pick up and use, a well-populated App Store, and excellent multimedia capabilities. Web browsing is fast and efficient, and the iPad 2 is also a great device for viewing photos, watching videos and listening to music.

Though the streamlined iPad experience has won many fans, Apple's closed platform means the iPad 2 doesn't offer the same flexibility as Android tablets like the ThinkPad Tablet. In particular, the iPad 2 has an inferior notification system to Android tablets, and Apple doesn't allow you to customise and display live widgets on the iPad 2 home screen. By the same token, the iPad 2 interface and overall user experience are far more polished than what is currently on offer from Android tablets. The iPad 2 feels much faster and smoother than any Android tablet we've tested.

The Lenovo ThinkPad Tablet runs the latest 3.1 version of Google's "Honeycomb" version of Android. Android 3.1 brings improved UI transitions, an expandable and scrollable recent apps menu, and resizable home screen widgets, along with improvements to the standard Web browser, calendar, e-mail and gallery apps. Lenovo also includes its "Launch Zone" software on the ThinkPad tablet, which is basically a fancy name for its UI overlay. The software includes five customisable zones for reading, listening watching, e-mail and the Web.

To enhance its business appeal, the Lenovo ThinkPad Tablet includes anti-theft software and the ability to disable the device if it's lost or stolen. It's similar to the Computrace software that Lenovo uses in its ThinkPad notebooks. Once activated, the software can track, located and remotely disable or lock the device in the event of theft. Other security features include an encrypted SD card slot, layered data encryption and the addition of Cisco VPN (virtual private network) to access corporate networks. 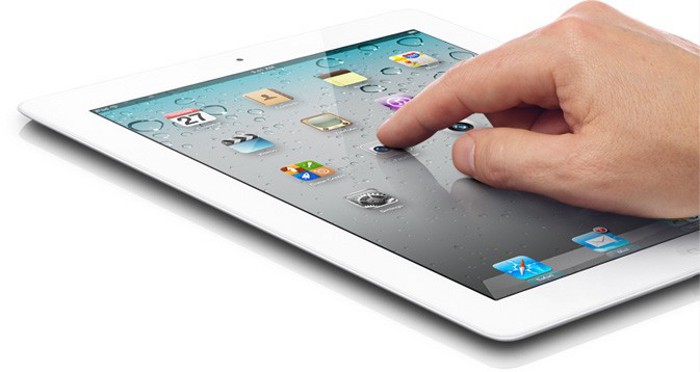 The iPad 2 offers a familiar, swipeable home screen enhanced by folders. The consistent Apple UI look and feel extends across all of the standard applications.

Lenovo has also included its own ecosystem, the Lenovo App Shop. The Lenovo App Shop is simply a range of tablet apps that have been tested by Lenovo itself, and will therefore work effectively on the ThinkPad Tablet. Lenovo says this will ensure consumers the app work on the tablet, and cited the store as a way of combating the issue of cross-compatibility of Android apps on smartphones and tablets, as well as negating security issues around malware and viruses.

The Apple iPad 2 is powered by a dual-core processor called the A5. Apple claims the processor doubles the speed of the iPad 2 and makes graphics processing up to nine times faster. Apple hasn't specified the amount of RAM the iPad 2 has, but it is generally assumed to be 512MB.

The Apple iPad 2 also includes two cameras; one facing the front of the tablet, the other rear-facing. The rear camera records 720p HD video, and takes still photographs, but both cameras have low specifications — the front camera is VGA, while the rear camera is just 0.7 megapixels. Both cameras can be used with Apple's FaceTime video chat application, which debuted on the iPhone 4.

On the other hand, the Lenovo ThinkPad Tablet Android tablet has a significantly better 5-megapixel rear camera on its rear that also doubles as a 720p HD video recorder, and a 2-megapixel front camera for video calls. The ThinkPad Tablet can also claim to be a more powerful device than the iPad under the hood — it is powered by a 1GHz dual-core processor, has 1GB of RAM, 32GB of internal memory, and a microSD card slot for extra storage. The Lenovo ThinkPad Tablet also has one other significant advantage over the iPad 2 — its Web browser can display Flash video content.

The Lenovo ThinkPad Tablet includes a full USB port for transferring and storing files, meaning you can plug in a USB thumb drive into the tablet to quickly access your files. Along with this full-sized USB port, the Lenovo ThinkPad Tablet also has a mini-HDMI out port, so it can be plugged directly into a high-definition television with the right cable (the cable is an optional accessory).

The iPad 2 doesn't have a full sized USB port, or a HDMI-out connection, but users can purchase an Apple Digital AV adapter ($45) accessory that allows the iPad to be connected to a television via HDMI. Unfortunately, iPad users will also need to purchase the optional iPad Camera Connection Kit ($35) to connect either a digital camera via USB, or a full sized SD card slot. In this regard, the iPad is much more limited than the Lenovo ThinkPad Tablet.

Perhaps the best feature of the Lenovo ThinkPad Tablet is the fact that it comes standard with a digitiser pen that allows users to take notes straight onto the screen. The digitiser pen supports handwritten text entry, document mark-up and drawing. Critically, the digitiser pen doesn't feel too different from an ordinary pen. It has a relatively fine tip, and is comfortable to grip. The ThinkPad Tablet includes a note taking app that is compatible with the digitiser, but users can also annotate PDF documents, too. Lenovo cited the use of the digitiser pen in the education sector as one example of its appeal. 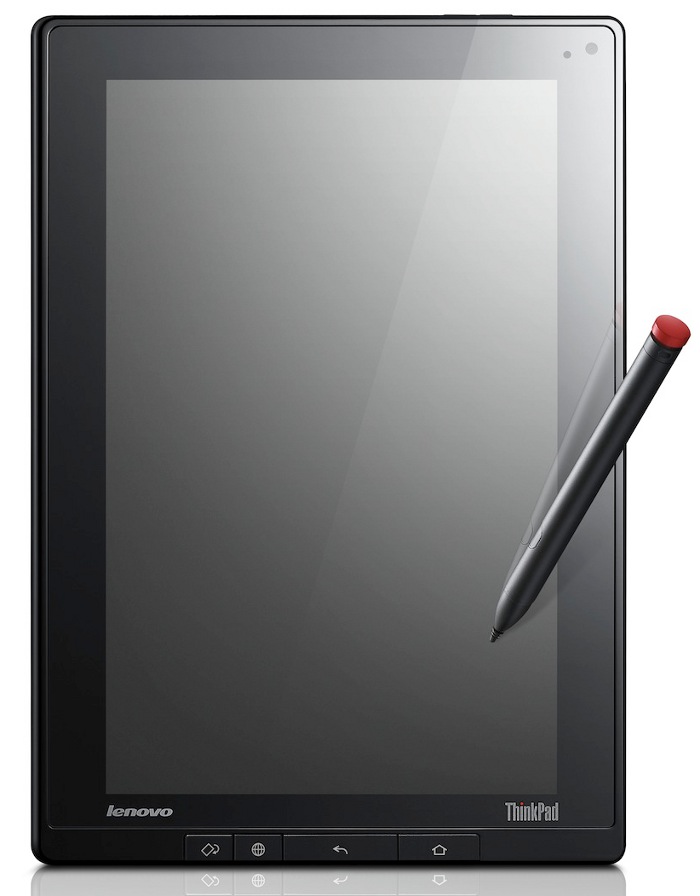 Lenovo will sell an optional keyboard portfolio carry case for $89, while the ThinkPad Tablet also comes standard with a digitiser pen that allows users to take notes straight onto the screen.

Lenovo will also sell an optional keyboard portfolio carry case for the ThinkPad Tablet ($89). Much like the ASUS Eee Pad Transformer, the portfolio case turns the ThinkPad Tablet into a notebook-style device with full, physical keyboard. Unlike the Transformer, the accessory doesn't have its own battery, but it does double as a proper protective case, and also has a surprisingly responsive optical trackpad.

Lenovo has promised 10 hours of video playback time before the ThinkPad Tablet's battery runs out. We'll be keen to put this to the test when we review the tablet more thoroughly, as the iPad 2 is claimed to offer a battery life that equals the ThinkPad Tablet.

The Apple iPad 2 is available through Apple retail stores and select authorised resellers. The iPad 2 is slightly cheaper than the original iPad, starting at $579 for the entry-level 16GB Wi-Fi version.

The Lenovo ThinkPad Tablet will come in Wi-Fi only and Wi-Fi + 3G options in 16GB and 32GB sizes, though the 32GB model is only available with 3G. Pricing starts at $599 for the 16GB Wi-Fi only model, and $729 for the 16GB Wi-Fi + 3G model. The 32GB Wi-Fi + 3G model will sell for $839. The Lenovo ThinkPad Tablet will be available to order online later this month, but will officially release in Australia in September.

What do you think about the Apple iPad 2 and the Lenovo ThinkPad Tablet? Let us know in the comments below!