The HTC Desire, along with the Samsung Galaxy S, is one of the most popular Android smartphones on the market in Australia. HTC has just lifted the lid on its hotly anticipated next-generation Desire, called the Desire S. Does it have what it takes to compete with the Apple iPhone 4?

Check out our detailed preview of the HTC Desire S and see our roundup of the best upcoming smartphones in 2011.

The HTC Desire S has a 3.7-inch SLCD display with a resolution of 480 x 800, a 5-megapixel rear camera that doubles as a 720p HD video recorder, a 1.3-megapixel front camera for video calls, and an aluminium "unibody" design that HTC claims makes it stronger than the original Desire.

With this in mind, how does the HTC Desire S stack up against the iPhone 4 when it comes to specifications?

The iPhone 4's stainless steel band (which also doubles as the phones antenna) is certainly intriguing, and at just 9.3mm thick, it remains one of the best built smartphones on the market. 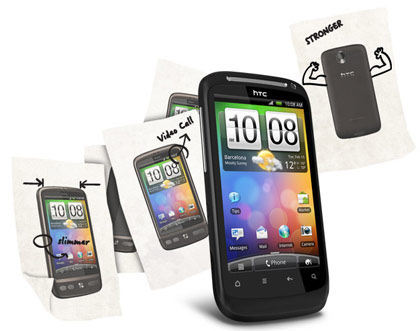 The HTC Desire S has a 3.7-inch SLCD display, slightly larger than the iPhone 4's 3.5in screen. Unlike the original Desire, which used an AMOLED screen, the Desire S has a Super LCD display; it is claimed to offer a clearer and brighter image, along with enhanced battery life compared to regular LCD screens, but doesn't offer the vibrancy of Super AMOLED screens like the Samsung Galaxy S.

Apple's iPhone 4 uses IPS technology (the same used on the iPad, and thanks to its 640 x 960 pixel resolution it has been described as a "retina" display, due to the human eye being unable to distinguish individual pixels.

The HTC Desire S Android phone runs the 2.4 Gingerbread version of Google's Android platform, and features HTC's Sense UI overlay. This consists mainly of home screen widgets and applications, including the handy HTC Friend Stream, which aggregates social networking contacts from Facebook and Twitter, People, which combines all forms of contact with an individual in your phonebook, along with a weather widget that offers fantastic animations, including a windscreen wiper that swipes across the screen to wipe away raindrops. Android 2.4 Gingerbread also means the Desire S has a revamped keyboard, better copy and paste, improved power management, and a slicker user interface as improvements over previous versions of the Android platform.

The iPhone 4 runs Apple's iOS4 operating system. It offers a familiar swipeable home screen enhanced by folders, and the consistent Apple UI look and feel extending across all of the standard applications. If you have never used an iPhone before, you can expect a device that is easy to pick up and use, a well-populated App Store, and excellent multimedia capabilities. The iPhone's iPod integration ensures it remains one of the best music smartphones on the market, while mobile Web browsing is fast and efficient. 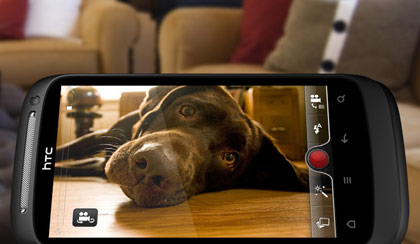 Though the streamlined iPhone experience has won many fans, Apple's closed platform means the iPhone 4 doesn't offer the same flexibility as smartphones like the HTC Desire S. The iPhone has an inferior notification system to Android phones, and it doesn't let you customise and display live widgets on your home screen. By the same token, the iPhone interface and overall user experience are far more polished than what is currently on offer from Android phones.

The HTC Desire S will be exclusive to Telstra for three months after it launches, which is expected to be any time between now and June. A Telstra spokesperson also confirmed that there is an option to extend the deal beyond the initial three-month period.