The Acer TravelMate TimelineX 8572G is a 15.6-inch notebook designed to appease business users. It's based on an Intel Core i7-620M dual-core CPU, so you know it's fast, and it has a reasonably light weight and slim profile compared to other notebooks in its class. However, its screen isn't great and it also doesn't come with a digital video output as standard.

We like the overall style, the shape and the slim profile of the Travelmate TimelineX 8572G; it's a thin, square-shaped notebook without any fancy trimmings and glossiness, but it does have a quirk: a non-standard button layout. The power button in particular is a little hard to use at first, until you realise that it's not a button at all, but actually a slider. Below the sliding power switch is a toggle for the 802.11n Wi-Fi and Bluetooth modules, although this brings up a software utility from which the settings can be manipulated; next to this toggle is a shortcut button for Acer's SmartPower Manager, and next to that is the eject button for the DVD burner (there is no eject button on the DVD burner itself). It's a different design, to be sure, and we're not sure it's entirely necessary. We'd prefer a standard power button and a proper, physical toggle for the Wi-Fi. The only other thing we'd change about the notebook's design is the intensity of its LEDs, which we feel are too bright.

There aren't any application shortcut buttons, which is no big loss. The keyboard has nice, full-sized keys in a typical layout. It could stand to be a little more solid, but it's nevertheless comfortable to type on and there is an ample palm rest (over 9cm). It also has a number pad (it's not squished, unlike the numpad on the Medion Akoya P662. The touchpad is huge (84 x 51mm), smooth and responsive, and it supports multi-finger gestures for scrolling, zooming and rotating. A fingerprint reader is nestled between the left- and right-click buttons and it can be used to log in to the system as well as for logging in to regularly used Web sites.

When it comes to office work and media crunching ability, the TravelMate 8572G is a finely tuned machine. It felt beautifully responsive when loading applications, switching windows and browsing the Web, and it also delivered fast results in our benchmarks. With its 2.6GHz Intel Core i7-620M CPU, 4GB of DDR3 SDRAM and 5400rpm, 640GB hard drive, it powered through all of our tests with ease. In the Blender 3D rendering test it recorded a time of 50sec; in the iTunes MP3 encoding test it recorded 54sec; in the AutoGordianKnot Xvid test, it took a swift 58min to turn our DVD file into a 1.5GB Xvid file. All of these results are on par with the other Core i7-620M business notebook we recently reviewed, Lenovo's ThinkPad T510. 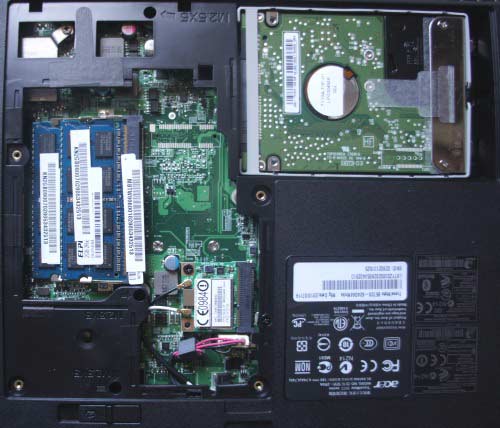 The internal layout of the TravelMate TimelineX 8572G

Even the graphics performance in 3DMark06 was great: the TimelineX scored 7355 in this benchmark, which is even better than some gaming notebooks such as the ASUS G51J 3D notebook — not bad for a notebook primarily designed for business users.

The TimelineX 8572G actually includes two graphics adapters: it features Intel HD graphics in addition to NVIDIA GeForce GT 330M graphics. The high score of 7355 in 3DMark06 was recorded with the NVIDIA adapter, while the Intel HD adapter recorded 1937 in the same benchmark. If you require extra graphics grunt in your day-to-day work, then the inclusion of the GeForce 330M adapter will definitely come in handy; it's miles better than many hybrid solutions we've seen where the difference in performance between the Intel and third-party graphics isn't that great (for example, the previously mentioned Lenovo Thinkpad T510).

To make use of either graphics card, you'll have to switch to it manually (we like this, as we're control freaks). While you don't have to restart, you'll have to make sure you aren't running any applications when you want to make the switch. The dual graphics setup come in handy when you don't need the extra graphics grunt, but instead value a long battery life. In our tests, in which we disable power management, enable Wi-Fi, maximise brightness and loop an Xvid-encoded video, the TimelineX's 66 Watt-hour battery lasted 2hr 51min using the NVIDIA graphics adapter. This is a great result in its own right and much better than what we've seen from recent 15.6in laptops aimed at home users.

When we switched to the Intel graphics adapter, the battery lasted 3hr 11min in the same test. This 20min gain in battery life is in line with what we've seen from other NVIDIA hybrid machines (such as the MSI FX600), but a few minutes less than the difference between the graphics cards on the ATI-based Acer Aspire TimelineX 5820TG.

Acer includes its own power management profile, which can be invoked by pressing the shortcut button next to the Wi-Fi toggle button. This profile dims the screen and disables the optical drive. In our tests, it gave the TimelineX a further 26min of life, for a total of 3hr 37min. If you only use the notebook for light Web browsing and creating documents, and if you keep the brightness low, then the battery will last a lot longer than four hours. This means that the TimelineX 8572G is a great 15.6in model for any user who puts a high value on battery life.

Because it's a business notebook, the TimelineX 8572G doesn't have consumer staples such as HDMI output, you don't get an ExpressCard expansion slot, and it's missing modern ports such as eSATA, USB 3.0 or DisplayPort. Instead, you get four USB 2.0 ports, a VGA port, a DVD burner, an SD card slot, Gigabit Ethernet, microphone and headphone port, and also a built-in 56Kbps modem. There is a proprietary Acer Easyport IV connector on the left side of the unit, which can be used to connect a replicator that also adds DVI into the mix. There is no desk docking option. 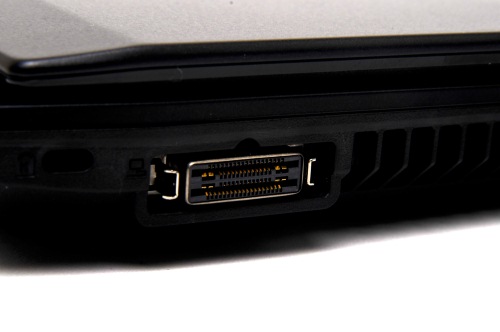 The Acer Easyport IV connector on the left side of the notebook can be used to plug in a port replicator.

All up, the Acer TravelMate TimelineX 8572G is a great notebook. We're impressed with its battery life, overall performance and it's also very comfortable to use — even on your lap. We just wish it had a more modern and convenient set of ports (such as HDMI), a more conventional button layout and less intense LED status lights.

Become a fan of PC World Australia on Facebook