Samsung has finally unwrapped its Galaxy Tab tablet with many observers claiming it may be the first genuine threat to Apple's all-conquering iPad. But how does it measure up?

More about the Samsung Galaxy Tab price in Australia.

Similar to the Dell Streak — they both have smartphone capabilities — the Samsung Galaxy Tab's form factor is a big talking point. With a 7in display, it's smaller than Apple's iPad and therefore easier to carry around. This means it's a hybrid device that sits somewhere between a largish touchscreen phone like Samsung's own Galaxy S, and the iPad.

Like the iPad, the Samsung Galaxy Tab will be used in mainly as a media consumption device

With this in mind, how does the Samsung Galaxy Tab stack up against the Apple iPad?

We were lucky enough to spend some time with the Samsung Galaxy Tab and came away quite impressed. Firstly, the Samsung Galaxy Tab offers greater customisation options than the iPad — whether it's changing themes, backgrounds or the interface's entire look and feel, Google Android is definitely far more flexible and open than the iOS platform used by the iPad. Of course you can jailbreak the iPad, just like the iPhone, but this will void your warranty.

The iPad's display uses IPS technology, while the Samsung Galaxy Tab boasts a standard capacitive TFT touchscreen. It's a shame the Galaxy Tab doesn't get a Super AMOLED display like Samsung's Galaxy S smartphone — Samsung says it opted for a regular TFT screen to keep the cost down, due to a shortage of AMOLED displays. Despite this, the Galaxy Tab's display is crisp, bright and clear and makes for a pleasant Web browsing experience. Browsing may be initially more appealing on the larger-screened iPad, but the trade off is that the Galaxy Tab is far more pocketable and easier to carry around. In particular, we found it was very comfortable to hold with a single hand, and also slips easily into a suit jacket pocket. If portability is a key concern, the Samsung Galaxy Tab is definitely impressive. 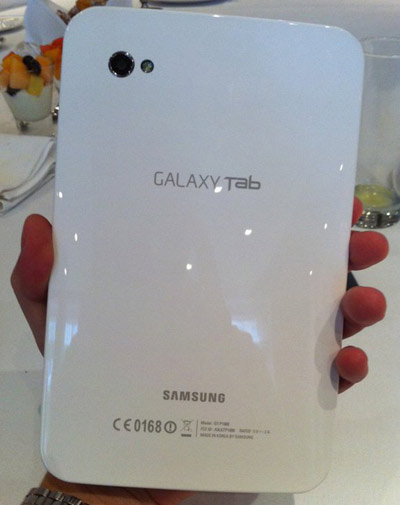 The Samsung Galaxy Tab is easier to carry around than the iPad. We found it very comfortable to hold with a single hand

The Apple iPad is an excellent multimedia device, aside from the lack of Flash and built-in camera. Videos look superb on the large screen, while Web pages render superbly. The Samsung Galaxy Tab is far more flexible, however; you can transfer files by dragging and dropping them from your PC and you don't need to run iTunes. There are a number of third-party media player applications designed for the Android platform to boost the tablet's music and video playback capabilities, and Samsung has equipped the Galaxy Tab with not one, but two cameras. The front facing 1.3-megapixel camera can be used to make video calls, while the rear 3.2-megapixel camera with single LED flash takes still photos and records video. The Galaxy Tab also boasts DivX and Xvid support.

Despite being marketed purely as a tablet, the Samsung Galaxy Tab is also capable of making phone calls. Calls can be made using a wired headset, a wireless Bluetooth headset, or using Galaxy Tab's built in speakerphone. The front facing camera is a handy inclusion here, as it allows video calling and can also handle conference calls. A range of accessories will be sold for the Galaxy Tab, including a convenient stand that allows the tablet to sit upright on a desk or table.

We were also impressed with Samsung's content "hubs," particularly the Readers Hub. Designed specifically for the Galaxy Tab, this application groups newspapers, books and magazines into a single portal. Our demo unit had the latest Australian newspapers installed in PDF format, and Samsung stated that a free seven-day subscription trial will be available once it launches. Samsung has partnered with Kobo, PressDisplay and Zinio to deliver this content, and will have more than 2 million books and more than 2500 magazines in 20 languages and 1600 newspapers in 47 languages available at launch. 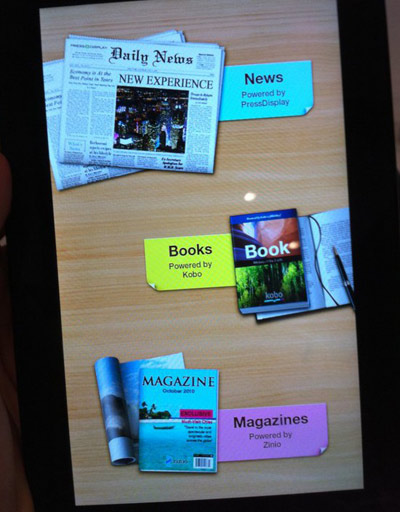 The Samsung Readers Hub, designed specifically for the Galaxy Tab, is an app that groups newspapers, books and magazines into a single portal.

One issue that Samsung has to contend with is app compatibility, a problem not encountered by Apple due to iPad apps designed to a single set of standards. The larger screen and therefore higher resolution of the Galaxy Tab means that some applications in the Android Market won't use the full extent of the Galaxy Tab's screen real estate.

Samsung claims that at least 85 per cent of applications on the Android Market will work correctly with the Galaxy Tab, and is currently in discussions with Google over future-proofing this issue.

What do you think about the Samsung Galaxy Tab and the Apple iPad? Tell us in the comments below! Also, check out Samsung's advertising campaign for the Galaxy Tab below:

Experience matters as you face the new normal

Show Comments
Oracle adds analytics to MySQL in the cloud