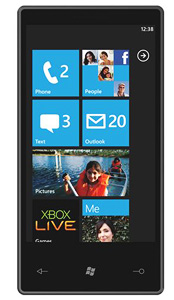 Much of the success of any mobile operating system comes down to one thing: It's the apps, stupid. The first crop of Windows Phone 7 apps mirror some of the strengths and weaknesses of the OS itself. They have an uncluttered and visually interesting design, but they can sometimes be a hassle to navigate.

Unsurprisingly, the current selection of apps for Windows phones is sparse. Many of the top picks are games for Xbox Live. But a few of the big guns are already present, including eBay, Facebook, IMDb, Netflix, Twitter, and The Weather Channel. Microsoft also offers a mobile version of Office on Windows Phone 7.

Still, the list of major names absent (so far) from the Windows Phone Marketplace is long. Among the missing are Angry Birds, Dropbox, Evernote, Instapaper, Kindle, the New York Times, Tap Tap Radiation, Words With Friends, and a whole lot more.

(For a look at how Windows Phone 7 compares overall with iOS and Android, see our most recent mobile OS smackdown.)

Many of the early apps seem to have adopted the design aesthetic that Microsoft applied to the OS. Open the eBay app, for instance, and it shows you four current deals displayed in square tiles similar to the ones on the Windows Phone 7 home screen. Windows Phone 7 apps also tend not to cram the screen full of information, instead opting for a design with lots of open space, just as the OS does.

Native Windows Phone 7 apps, like the music and pictures applications, often show text and icons superimposed over a slightly dimmed photo in the background. That same motif appears in the eBay app and in iFood Assistant Plus, a cooking app from Kraft Foods.

And more than in other mobile OSs I've tried, the predominant navigation system in Windows Phone 7 and its native apps is to swipe from one screen to another. It's as if each app consisted of three or four sheets of paper hanging from one of those metal wheels that diner cooks use to arrange their orders. Spin the wheel, and you get more information. Frequently, you'll see a part of the next screen on the right margin of the screen you're looking at, a clue that more data is hiding just out of sight.

In the Twitter app, for instance, the first screen shows the timeline of tweets you've received, the screen to the right shows tweets that mentioned you, the next screen shows direct messages, and so on.

Sharing navigation and design themes can be a real advantage, since the consistent arrangement gives you a common experience with everything on your phone. And I like Windows Phone 7's highly visual, minimalist approach. But there are some drawbacks.

Because each screen has relatively little information, you'll find yourself doing lots of vertical scrolling to see more data. In other cases, you'll have to touch an entry to go to a new screen with more details. In the IMDb app, for instance, you touch the tile for The Social Network to go to a screen with a plot summary, showtimes, user ratings, and more. Swipe from there, and you'll see pictures of the cast and more details about reviews.

If you think that's a lot of swiping, clicking, and scrolling, you're right. And once you get deep into an app, figuring out how to get back to where you want can be hard. Sometimes you need to swipe to go back; other times you use the hardware back button on the bottom of your Windows Phone 7 handset. Few of the apps I tried had much in the way of internal navigation icons, like the kind that are frequently found in iPhone apps to help you quickly return to the major sections. That forces you to backtrack until you get where you want to go.

These aren't showstopping problems by any means. But they do seem to make navigating around a Windows Phone 7 handset and its apps take more pokes and prods than necessary.

Why developers are key drivers of new business for Australian enterprises