Android users, listen up: Firefox has finally arrived for your phone. Well, almost.

Mozilla released an early build of its mobile browser, codenamed Fennec, for Android phones this week. The browser is described as a pre-alpha build, meaning it's still heavily under development and far from being a final product.

The app, as such, isn't a complete representation of what'll eventually hit Android's App Market. But it is an interesting glimpse into what Mozilla has on the way for Google's Android platform. Here's a sneak peek at what you can expect. 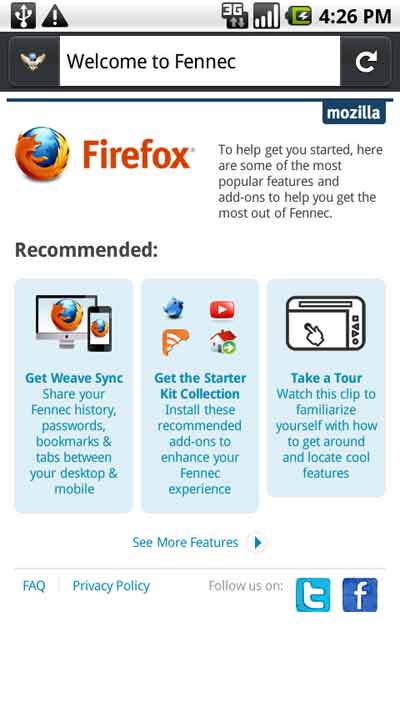 If I were to describe the early edition of the Firefox Android app in three words, I'd call it "rough but promising." This pre-alpha build, just announced on Tuesday, is missing a great deal of functionality. The on-screen keyboard doesn't pop up automatically when you tap on a text field, for example, and the app doesn't seem to recognize the phone's hardware "Back" button (pressing it while browsing a Web page didn't do anything at all for me).

But that kind of thing is to be expected in a piece of software that's not even at the beta, let alone alpha, level of development. So from here on out, I'll focus on what the Firefox Android app does have, and what potential it shows for the future of Android Web browsing. 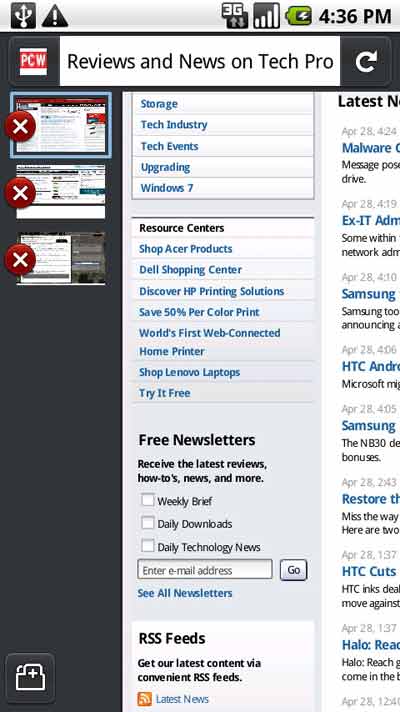 Firefox typically handles multiple tabs with ease, and its Android edition looks like it'll be no exception. Scrolling to the far left of a page while browsing on Firefox Android brings up a vertical tab panel. The column shows tiny thumbnails of every page you currently have open; tapping on any thumbnail takes you to that page within a second. At the bottom of the panel sits an icon that allows you to start a new tab.

Scrolling all the way to the right brings up another panel, this one featuring options to mark a page as a favorite, navigate forward or backward, and open a preferences menu. The basic preferences themselves are pretty straight-forward: You can set your start page, enable or disable JavaScript, and manage your privacy settings. The most impressive part of Mozilla's Android browser, though, comes in via a secondary preferences menu -- one entitled "Add-ons." 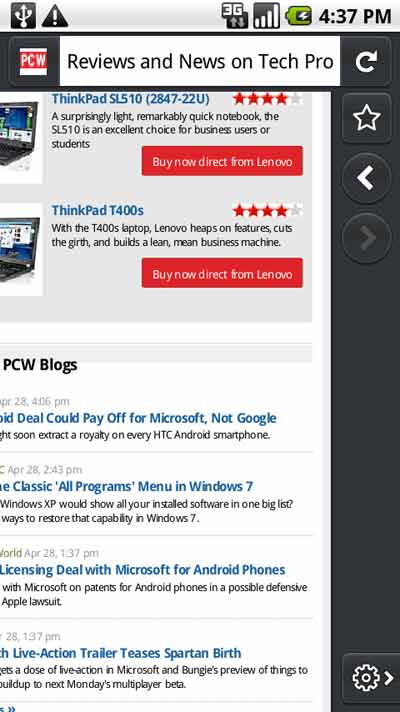 Like the Firefox desktop edition, the Firefox Android app appears to be primed for expansion and customization. Nearly a hundred mobile-specific add-ons are already available for download, and that number is likely to grow exponentially as the browser starts reaching more and more users.

The most exciting add-on available for the Android edition so far is undoubtedly Mozilla's own Weave Browser Sync. It lets you sync your bookmarks, saved passwords, and browsing history between your desktop and your Android phone. It can even sync your current set of active tabs, meaning you could open the app on your phone and see the same exact pages you had open when you left your computer. Pretty sweet, eh?

Other add-ons I found in the Firefox Android pre-alpha pool included a YouTube Enabler tool that lets you watch Flash-based YouTube video directly in the browser; a Near Me utility that puts location-based searching into the program; and a TwitterBar plugin that allows you to send tweets by typing into the browser's address bar.

Some familiar Firefox add-ons are already available for the mobile edition, too, including GreaseMonkey, IETab, and Adblock Plus. You can browse the full list for yourself at Mozilla's mobile add-ons page. 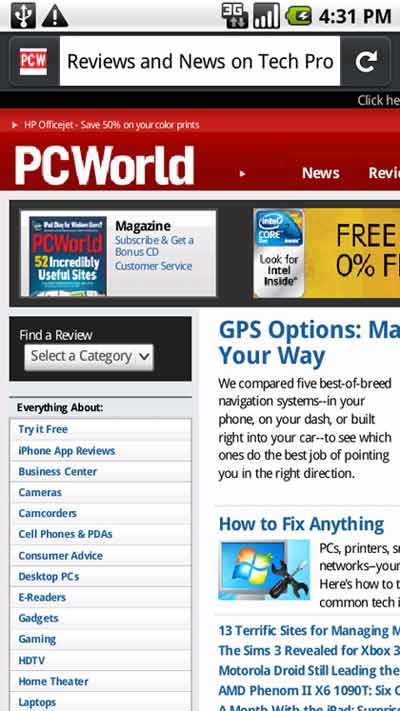 It's hard to say much about the actual browsing experience with Firefox's first semipublic Android offering; aside from the missing elements I mentioned early on, Mozilla's developers are upfront about the fact that this pre-alpha version hasn't been optimized for memory usage just yet. Not surprisingly, then, pages are slightly slow to load, and things aren't always working quite perfectly.

The promise, however, is definitely there. One thing that remains to be seen is whether multitouch pinch-to-zoom functionality will be added in before the browser's final release; as of now, you're stuck using the old tap-tap method of zooming in and out of pages. If pinch-to-zoom is ultimately supported, I could see this becoming a very compelling option for the Android platform.

For now, though, I wouldn't recommend installing this build for any kind of regular use; it's simply too rough to be useful on a practical level. If you're curious to see it first-hand, though -- and willing to bear the occasional system crash -- you can find a link to download it here. Android 2.0 or higher is required. And be sure to read the warnings on the page before proceeding; as with any pre-release build, some minor risks are involved.

While it may not be quite ready for primetime, Mozilla's Firefox Android browser is certainly an app to keep an eye on. For now, the Dolphin Browser will remain the default on my personal Android phone -- but once Mozilla's Android offering is finalized, I suspect I'll have a difficult decision on my hands.

JR Raphael frequently covers mobile technology for both PCWorld and eSarcasm, his geek-humor getaway. You can find him on Facebook: facebook.com/The.JR.Raphael

21 Sep
.NEXT Conference
View all events