There's an innate geek appeal in music, where everyone has to at least be able to count to four. (Insert your own drummer joke here.) Entire categories of music, such as nerdcore and minimalist, are heavily populated by techish types. Other singers and musicians may surprise you with their tech chops.

Some of the leading lights in this category will be no surprise at all, especially to those who enjoy a good synthesizer riff. Moog pioneer Wendy Carlos is an astronomy buff -- a coronaphile, specifically -- recognized for her remarkable eclipse photos . She double-majored in music and physics at Brown.

And Thomas Dolby went from New Wave pop fun (and one perfect album ) to both pioneering the ringtone market and acting as musical director for the TED (Technology, Entertainment, Design) Conference.

It's not all plinky synths and asymmetric haircuts, though: Huey Lewis also majored in engineering before dropping out of Cornell. It's not entirely about the '80s, either (though again, clearly something about the youth of the slacker generation made us geektastic).

Backing up to the '70s, we find Tom Scholz, lead musician for Boston ("More Than a Feeling"), with a mechanical engineering master's from MIT; he worked as a product design engineer at Polaroid Corp. while developing the musical tech he needed to produce the band's particular sound and holds a couple of dozen patents so far. And '60s folk rock icon Art Garfunkel has a master's in math from Columbia University.

Stretching way back to the early years of recorded music, superstar singer, comedian and Broadway pioneer Bert Williams ("Nobody") was on his way to Stanford to begin a civil engineering major when he decided to drop out and join a minstrel show. (Not the first time San Francisco has distracted a would-be nerd.)

Moving forward in time, '90s alternative rock god and current "forget the record labels" online hero Trent Reznor of Nine Inch Nails was in pursuit of a computer engineering degree from Pennsylvania's Allegheny College before moving to Cleveland to start a series of bands. The ineffably nerdical "Weird Al" Yankovic was actually an architecture major, but his body of work ("It's All About The Pentiums," baby) speaks for itself, as does NSYNC star Lance Bass ' spirited pursuit of his cosmonaut certification. 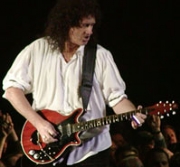 Our honor roll is in tune with three remarkable nerds. Todd Rundgren ("Hello It's Me") is legendary for developing the Utopia Graphics System, one of the very first paint programs, and has remained profoundly engaged with technology throughout his recording and producing career. Queen guitarist Brian May received his Ph.D. in astrophysics from Imperial College in London in 2007 and is now chancellor of Liverpool John Moores University as well as a successful popular science writer.

Finally, song parodist and Dr. Demento favorite Tom Lehrer left show business to focus on mathematics; he has a bachelor's and a master's in math from Harvard and is reputed to occasionally burst into song during lectures for his students at UC Santa Cruz.

Driving Sales and Cash Flow for the IT Supply Chain